Wedding ceremonies and marriage are of great importance in Orthodox Church. The family is the crucial part of the society and therefore the union between a man and a woman is sacred. It is recommended that the wedding takes place during the morning hours, of possible after the morning liturgy. It is vital that both bride and groom fast before the ceremony. It is not allowed to schedule weddings during the Lenten season; the Advent and Epiphany seasons; the Fasting season preceding both the Feast of Saints Peter and Paul and the Feast of Dormition; as well as on special fasting days. Besides, Holy Matrimony includes many rituals, and each of them has special meaning and significance.

The priest blesses the rings, takes them in his hand and, making the sign of the cross over the heads of partners and says the two were united by God. The 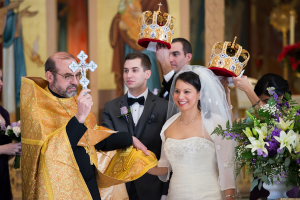 couple then exchanges the rings same as in many other religions. The rings are the symbol of agreement, and by exchanging them, partners promise that weaknesses of the one will be compensated for by the strength of the other. It means that that the two were incomplete by themselves, and once they are together they become perfect.

After this, both the bride and groom are handed candles which symbolize the lamps of the five wise maidens of the Bible waiting for Christ, as well as the spiritual willingness of the couple to receive Christ. The priest joins their right hands together as a symbol of couple´s oneness and asks God to “Join these thy servants, Unite them in one mind and one flesh.”

The main part of the wedding service is the Crowning in which the groom and the bride are made as the rulers of their little kingdom. The crowns that priest use for this wedding service emulate the crowns of martyrdom. This further means that every true marriage involves massive self-sacrifice on both sides. After this, the partners recite the readings of the Epistle and the Gospel and take the wine from the “common cup” which is a symbol of mutual sharing of both good and bad.

Finally, the priest leads newlyweds in a circle, around the table with the Gospel and the Cross, allowing them to make their first steps as a married couple, and reminding them that Christian way of living revolves around the Lord. After this, they return to their places where they will be blessed by the priest.